The Pack entry
Papyri
Attributions and quotations
Filling out entries
The search module
Search results
A complete entry
And later ?

The computerisation project for the Mertens-Pack³ file was thus launched in 1999 and is now proceeding, co-ordinated by Marie-Hélène Marganne, of CEDOPAL. In charge of its realisation is Denis Renard, at the Centre Informatique de Philosophie et Lettres (CIPL) (Philosophy and Letters Computer Centre) at the University of Liège. The aim of this collaboration is to design a programme for storing and exploiting the rich information assembled in the last thirty or so years for the third edition of the Catalogue des papyrus littéraires grecs et latins or Mertens-Pack³.

The system has been designed with regard to the structure of information and the conventions in force for the constitution of ” Pack ” entries.

The central element of the database set up in the framework of this project is the Pack.

Each Pack entry is identified notably under :

Each entry in this table is linked to : 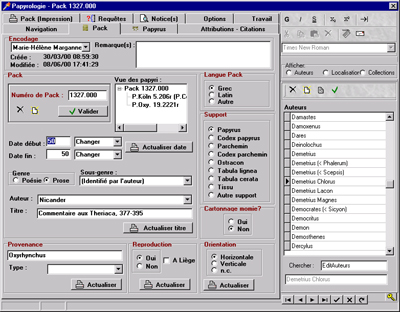 It happens fairly often that papyri earlier forming part of the same roll or codex are found in different public or private collections. In order to preserve the trace of each of these fragments, archived information gives : 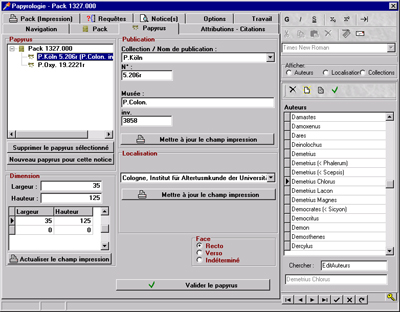 For each Pack entry it is possible to preserve the trace of the relevant attributions and quotations. In this example the text was attributed by Colonna to Demetrius Chlorus and by Lobel to Theon. The quotations are encoded as follows : classical author and his reference, possibly with edition indications in the “Modern author” area of the tab. 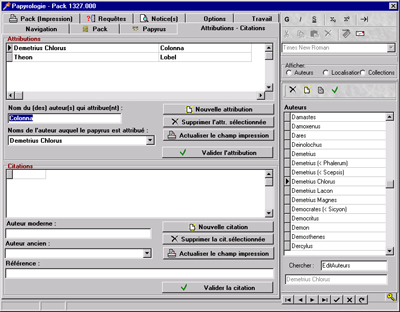 In this part of the program, the encoder has to complete the entry by introducing new data. Most of the fields are composed automatically from information already provided by the encoder (title, date, orientation, reproduction, dimension [of the largest conserved fragment], location, publication, origin, attributions, quotations) and are completed or nuanced at this stage of the work, whereas the fields concerning editions and bibliography are completely encoded in this same tab.

For the purposes of edition, the text to be inserted may be given formal attributes, either simple (bold, italic, underlined) or more complex, such as sets of Greek characters, with or without a table of characters. 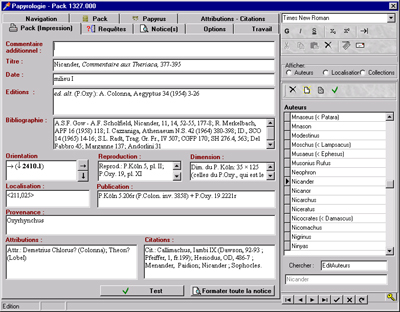 When the encoding module proved sufficiently complete and reliable, the question arose concerning the queries a user should be able to make to the data-base. Here are all the possibilities at present offered by the system’s search module. The search criteria, which can be used concurrently, are as follows :

The example here illustrates a query concerning the author Nicander, represented by papyrological witnesses anterior to 100 AD in the P.Oxy. publications. 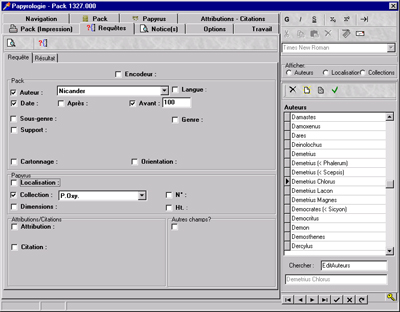 Here are some other searches that can at present be carried out :

In the near future, this search module will be completed by certain query fields and enhanced by the possibilities offered by the use of logical operators and sorting directives. Other queries could then be considered, such as :

The result of the query is presented in the form of a survey. On the left, a list of entry numbers answering the query. The query shown as example produces, in the present state of the data-base, a single occurrence. On the right, a view of the entry selected in the list on the left. 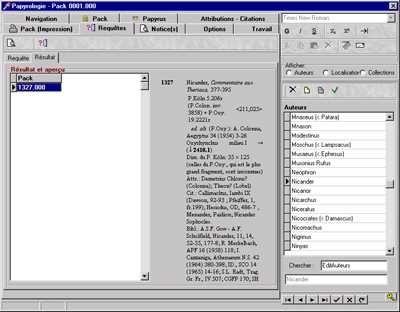 One click of the mouse activates the constitution of a list in hypertext covering all the results produced. At this stage, a print-out is possible of the list of entries, which conform to the usual presentation-mode of the Mertens-Pack catalogue. The grouped entries sent on conclusion of the research are presented in the same way as the individual entries that can be read. In addition, we plan to provide this result presentation module with advanced sorting and navigational functionalities. The entries produced are already in a format which would allow a part of the catalogue to go online. 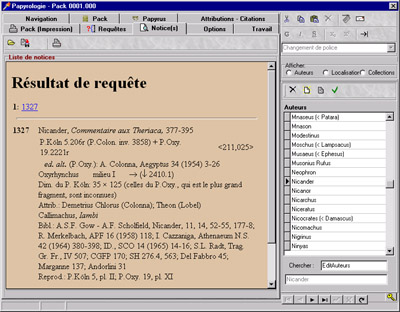 Since the beginning of this enterprise, the main criterion is flexibility. The database and the programme had not only to be adapted to existing information but to take into account every possibility of evolution involving new discoveries. The database today comprises about 3.500 entries, and will be constantly augmented in order to contain the whole Mertens-Pack entries, with a view to the publication and placing online of the third version of the file. We hope finally to be able to provide visitors to this site with the possibility to make queries themselves and thus offer a very high-level research tool to all papyrologists.