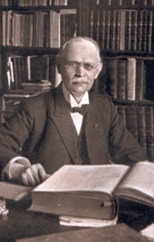 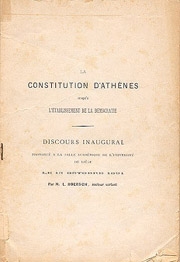 The links between the University of Liège and papyrology are both close and long-standing. Indeed, as early as 1891, the Rector Louis Roersch (Maastricht, 1831 – Liège, 1891), professor at the Faculty of Philosophy and Letters, in his inaugural address entitled La constitution d’Athènes jusqu’à l’établissement de la démocratie pronounced in the great hall on October 13, shortly before his death, referred to an Aristotelian work exclusively conserved on papyrus and edited very little earlier (1). His colleagues and successors did no less.

At the beginning of the century, Jean Pierre Waltzing (Frassem, near Arlon, 1857 – Liège, 1929), professor at the University of Liège had already understood the interest for classical philologists of studying papyri (2). As early as 1901, he had given a place in Le Musée Belge, revue de philologie classique, of which he was director, a large number of contributions on papyrology (3). After collecting a rich documentation, from 1903 to 1906, he first gave a private papyrology course to classical philology students before being appointed by a royal decree of May 25, 1906, to give an optional course entitled Histoire des institutions politiques et administratives de l’Egypte romaine d’après les papyrus. 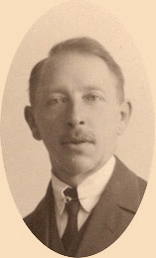 On October 16, 1926, he was relieved of this course at his own request, while Nicolas Hohlwein (Liège, 1877 – Liège, 1962) (4), who was to count among the founders of the International Association of Papyrologists, was authorised to initiate at the University of Liège, an open course on Greek papyrology (5), which he gave until he became emeritus professor in 1947. As Alfred Tomsin (6) was to write, this pupil of Jean-Pierre Waltzing’s, who had spent time in Berlin, Bonn, Heidelberg, Würzburg and Paris, had received “his essential training from the highly reputed papyrologists of the time, whose courses he had followed in Germany and France as beneficiary of a travelling scholarship during the years 1902 and 1903”. Nicolas Hohlwein published many articles and several works, including La papyrologie, bibliographie raisonnée (Louvain, 1905), L’Egypte romaine (Bruxelles, 1912), rewarded by the Royal Academy of Belgium and published in its Mémoires and Le stratège du nome (sine loco, sine data [1926]), a small volume reproduced in the collection Papyrologica Bruxellensia, 9 (1969) (7). One of his pupils, Robert Cavenaile, was to publish in Wiesbaden, in 1956, the Corpus Papyrorum Latinarum. 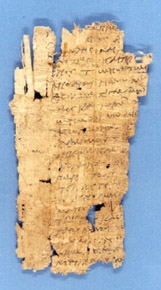 From 1949 to 1953, Claire Préaux (Liège, 1904 – Bruxelles, 1979) (8), professor at the Université Libre de Bruxelles, took over, in replacement, the Greek papyrology course at the University of Liège. There is certainly no need to retrace here the prestigious career of the author of such monumental works as L’économie royale des Lagides (Bruxelles, 1939) and Le monde hellénistique (I-II, Paris, 1978) (9), among whose students we note Paul Mertens. Claire Préaux was to return to the University of Liège during the academic year 1960-1961 when, holding the Francqui chair in the Faculty of Philosophy and Letters, she gave a course on the continuities between classical and Hellenistic Greece (10).

Claire Préaux was succeeded by Alfred Tomsin (Liège, 1899 – Liège, 1976), in charge of the Papyrology course from 1953 to 1969, and of the Practical papyrology course from 1964 (11). In February 1954, Paul Mertens and Philippe Derchain acquired in Cairo a few papyrus fragments for the University of Liège. “Doubtless, wrote Alfred Tomsin, these are not yet texts which could one day form the Papyri Leodienses ; they are just humble scraps, torn, worn, hard to read, but they nevertheless constitute excellent didactic material. They show various types of writing, from the first century to the Byzantine period ; the support varies, from the luxury copy, on surprisingly thin, white papyrus, to papyrus incorporated into a cartonnage with traces of polychrome linear decorations ; one papyrus has been used on both sides ; one of them shows accounts for wheat, another a Coptic text” (12). The latter, which preserves a three-line documentary text dating perhaps from the fifth century, was to be edited by Paul Mertens in 1957 (13).

Later, it was the project for producing a prosopography of Roman Egypt that led Alfred Tomsin, with the help of Etienne Evrard for the programmes, to undertake the first pioneering trials by information technology on Greek papyrology texts, using the new resources of the Laboratoire d’analyse statistique des langues anciennes (= LASLA), created at the University of Liège on 19 September 1961 (14). Accompanied by a call for international collaboration, this project was presented at Milan, in September 1965, at the XIth Congress of the International Association of Papyrologists, at the end of which its general assembly unanimously approved a motion asking for the creation within itself of a Committee for studying the organisation of data-processing as applied to papyrology (15). Three years later, the XIIth Ann Arbor (Michigan) Congress became the opportunity for presenting a programme for the automatic edition of Greek documentary papyri, with various types of index and a choice of concordances (16). At the same time the papyrologists received a small volume entitled Choix de papyrus grecs. Essai de traitement automatique (Liège, LASLA, 1968, 128 pp.), compiled with the notable collaboration of J. Bingen, A. Tomsin, A. Bodson, J. Denooz, J.C. Dupont and Et. Evrard. In 1971, at the XIIIth Marburg Congress, A. Tomsin and J. Denooz were looking towards the constitution of a series of general programmes which would enable interrogation of the papyrus texts on any particular point (17). Following this, research continued and gave rise to the publication of various papers on work carried out with the participation of some of A. Tomsin’s former students (18), such as Paul Bolland, now Governor of the Province of Liège, and Jean A. Straus, who has written numerous contributions on slavery in Greco-Roman Egypt, including L’achat et la vente des esclaves dans l’Egypte romaine (Munich-Leipzig, Saur, 2004 = ArchPF, Suppl. 14). Another of his students, Joseph van Haelst, is the author of the Catalogue des papyrus littéraires juifs et chrétiens (Paris, 1976). Shortly before his death, Alfred Tomsin had time to put the finishing touch to the Berliner Leihgabe griechischer Papyri II. Aus dem Nachlass Ture Kaléns fortgeführt und in französicher Tracht herausgegeben, a posthumous publication (Stockholm, 1977 = Acta Universitatis Upsaliensis. Studia Graeca Upsaliensia, 12). In fact, it was Paul Mertens who, aided by Odette Bouquiaux-Simon and by Jean Straus, corrected the second proofs of the volume and compiled the indexes. 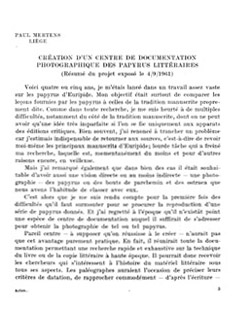 Paul Mertens was officially appointed to the papyrology course of the University of Liège from 1971, but, already in 1961, he had begun to build up the only collection in the world of literary papyrus photographs (19). A few years later, in order to facilitate the location of papyri in the second edition of the catalogue by R.A. Pack, The Greek and Latin Literary Texts from Greco-Roman Egypt (Ann Arbor, 1965), he drew up concordances (20) with the help of LASLA’s information technology resources at the University of Liège. He was therefore naturally given the responsibility for elaborating the third edition of the Catalogue des papyrus littéraires grecs et latins at the time of the XIVth International Congress of Papyrologists, at Oxford, in 1974 (21). On the occasion of the XVth Congress in Brussels, the University of Liège received the papyrologists for a day, on Tuesday August 30 1977.

For exploiting papyrus sources, the University of Liège papyrology seminar undoubtedly represented the ideal research center, since, with his team, Paul Mertens worked there on the updating of this opus magnum, constituting a magnificent library of papyrus editions, and related revues and literature, elaborating or completing an identification entry for each literary papyrus and continually enhancing the photographic archives. On the basis of the resources thus collected, it was possible to carry through such works as those of Robert Halleux on the alchemy papyri of Leiden and Stockholm (22), of Bruno Rochette on the bilingual papyri (23) and of Marie-Hélène Marganne on the Greek medical papyri (24). This rich documentation also attracted to Liège a large number of Belgian and foreign researchers, among whom A. Carlini, from Pisa, for the Corpus dei papiri filosofici greci e latini (25), M. Manfredi, from Florence, for the Corpus dei papiri greci di medicina, R. Cribiore, from New York, for the educational papyri, R. Otranto, from Bari, for book catalogues preserved on papyri, G. Cavallo, from Rome, for the history of Greek writing, A. Blanchard, from Paris, for the Ptolemaic roll formats, J.-L. Fournet, from Strasbourg, for the Dioscore of Aphrodite papyri, A. Wouters and G. Schepens, from Louvain, for the supplements to Fragmente der Griechischen Historiker (26), L. Rafaelli, from Pisa, for the Homerica, L. Savignago, from Padua, for the Euripides papyri, W. Brashear, from Berlin, and many others…

Having functioned for a long time without a name, the Centre de Documentation de Papyrologie Littéraire, – for short CEDOPAL -, received its official birth certificate within the University of Liège Philosophy and letters Faculty on June 28 1990, shortly before Paul Mertens became Emeritus Professor, on October 1st in the same year. Michel Malaise, professor at the University of Liège Philosophy and Letters Faculty at once accepted the presidency. Placed under the direction of Odette Bouquiaux-Simon, it then assumed a quadruple mission : to ensure the conservation of the documentation collected and continue to enrich it, to answer the various queries of researchers (papyrologists, philologists, historians, etc.) and to receive all those interested in this reconstituted library of antiquity, to prepare the new edition of the Catalogue des papyrus littéraires grecs et latins, and finally to develop papyrology studies, particularly through the two courses : Initiation à la papyrologie littéraire, given by O. Bouquiaux, and Initiation à la papyrologie documentaire, given by Jean A. Straus

With the aim of carrying out identifications, regroupings and reclassifications of papyri previously either not edited or not identified, CEDOPAL then acquired the System Ibycus Scholarly Computer, – a David W. Packard invention, enabling exploitation of the T(hesaurus) L(inguae) G(raecae) CD-ROM, prepared since 1971 at the University of California at Irvine by Professor Theodore F. Brunner and his team. Intensive use of this magnificent instrument, with whose manipulation Odette Bouquiaux had become familiar at Pisa, then in London, in 1987 and 1988, gave her the chance to make many new identifications (27), some of which, not yet edited, are listed in the Mertens-Pack3 file. 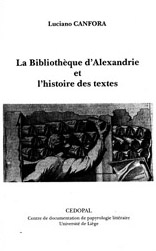 In addition, the celebration of the 175th anniversary of the University of Liège was the opportunity for the director of the CEDOPAL, to organise an exhibition in the Marie Delcourt hall of the General Library, from March 1 to 31 1993, called “Le monde des livres dans l’Antiquité classique“. With a few modifications, and Dutch translation, this was also presented at the Albert I Royal Library in Brussels in February-March 1995 and at the Leuven Universiteitsbibliotheek in September-October 1996 and 2004 (28). Other exhibitions requested the collaboration of CEDOPAL : “Du papyrus à l’ordinateur” (Pepinster, September 1992), “Le papier et le livre” (Visé, November 1996, with a lecture by J.A. Straus entitled “Le papyrus, papier de l’antiquité“), “Du papyrus au livre et à Internet” (Liège, Palais des Princes-Evêques, September 1997), “Médecine et société en Grèce antique” (Musée Royal de Mariemont, September-December 1998) for the Greek medical papyri, and for the literary section “Keizers aan de Nijl / Les Empereurs du Nil” (Tongeren, Gallo-Romeins Museum, September 1999-February 2000 ; Valenciennes, Musée des Beaux-Arts, March-June 2000 ; Amsterdam, Allard Pierson Museum, December 2000-March 2001) (29). CEDOPAL produced a video-film (Le monde des livres dans l’Antiquité classique, Liège, 1993) and published a brochure. It was entitled La Bibliothèque d’Alexandrie et l’histoire des textes (Liège, CEDOPAL, 1992) and reproduced the text of a lecture given by Professor Luciano Canfora at the University of Liège in the autumn of 1990.