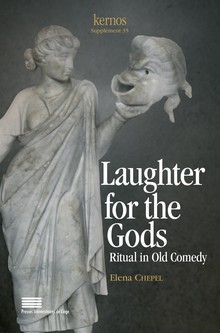 Ritual permeates Greek comedies of the fifth and fourth centuries BC. In Birds and Peace, the performance of sacrifice is central to the plot and its dramatic action; Women at the Thesmophoria is set during the celebration of a religious festival; while the story of Wealth relies on a successful incubation at the sanctuary of Asklepios. Other plays of Aristophanes, as well as fragments from other comic poets, also feature ritual processions, libations, hymns, and prayers. Why and how were these real-life practices of Greek religion represented in comedies? And what did it mean for the audience to laugh at them? This study is the first comprehensive analysis of the comic scenes in which characters perform rituals on stage. These theatrical representations of religious rites are examined not only with regard to their role in the fabric of particular plays, they are also analysed within the broader framework of the competition of dramatic poets at the Athenian festival of Dionysos. The approach chosen allows for a new perspective to develop on the old discussion regarding the religious dimension of Greek theatre. It is argued that comic rituals (and the playwrights behind them) consciously claim to be authentic, and thus transform the performance of a comic play into a significant event which is relevant for the city and its religion.