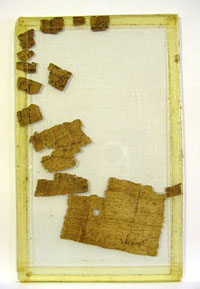 The Centre de Documentation de Papyrologie Littéraire (CEDOPAL) of the University of Liege is specially renowned among papyrologists for its unique collection of 8,000 photographs of Greek and Latin literary papyri. It also boasts a small collection of authentic, mostly Greek papyri from Egypt that has been in its possession for 50 years. This collection gives visitors, whether students, school children, researchers or private amateurs, the opportunity to come face to face with texts written as long ago as 2000 or as recently as 1400 years ago.

In February 1954, Professor Paul Mertens bought the CEDOPAL papyri in Cairo for use as educational material for papyrology students. Time and dust took their toll, however, and the papyrus collection was in dire need of restoration: following successive moves, frames were broken and their contents had moved to the edges. Some papyri had become dirty, so much so that it had become nearly impossible to decipher them. Other very fragile ones had started to tear.

To restore its small papyrus collection, CEDOPAL was able to rely on the generous assistance of Italian specialists who carry out a campaign every year to restore papyri at the Museum of Cairo: Mario Capasso, professor at the Università degli Studi di Lecce in Southern Italy, and Director of its Centro di Studi Papirologici, and his assistant, Natascia Pellé, researcher at the same University who has already carried out research at CEDOPAL several times.

Even before their publication, which is expected in 2006 to celebrate the 100th anniversary of the official opening of a papyrology course at the University of Liege, the restoration of the P. Leodienses, which was carried out during the last week of June 2004, produced substantial results and a few wonderful discoveries : 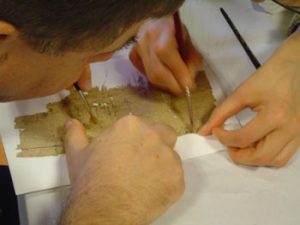 The italian team at work 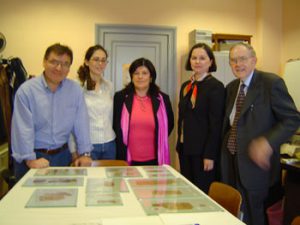 The team and work