Writing, Erasing, Rewriting – A Material Perspective on Manuscript Culture at the End of the Egyptian Bronze Age (preliminary title)

The topic of reuse of papyri is frequently mentioned in Egyptological literature and particularly in studies of written material from Deir el-Medina, where the reuse of papyri was commonplace. Nonetheless, the topic has never been studied extensively. Papyrus was reused in various ways, for instance by writing on the empty backside or sometimes even the margins of another manuscript of unrelated content. Occasionally, the ink of a previous inscription was removed to gain room for a new text, thus making the papyrus a palimpsest. 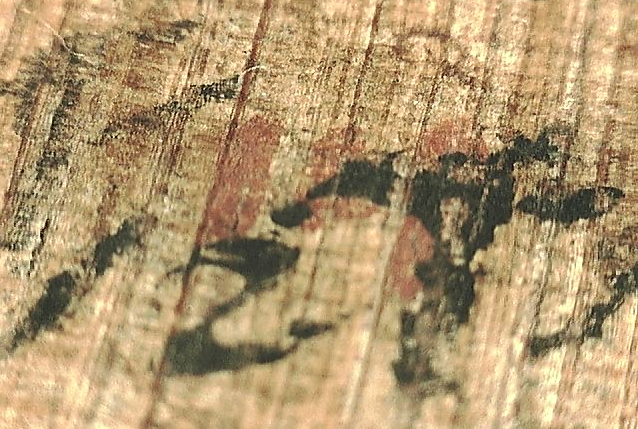 Most research on ancient Egyptian papyri focuses on the content of the text written on them. However, systematic studies of the material aspects – the papyrus sheet, the ink, the arrangement of texts, the peculiarities of the writing, etc. – can reveal a lot of information on writing customs and the role of manuscripts in ancient Egyptian society. The aim of my PhD is to study use and reuse of papyri at the end of the Egyptian Bronze Age by following a materiality-focused methodology.

My PhD project is aimed to shed light on ideas and concepts of repeated use of text carriers in Egypt by studying the phenomenon during a time of cultural change at the end of the New Kingdom. This includes both practical questions on ancient manuscript use – How was the ink removed? Which papyri were salvaged and how often could they be re-purposed? – as well as matters concerning the ancient Egyptian manuscript culture, including the topic of human interaction with a written document. The latter carries particular meaning at the end of the Egyptian Bronze Age, given the variety of changes related to script, text formatting, and administrative practices noticeable in this period. Individual case studies from Deir el-Medina and other places are selected to re-trace the biography of the individual manuscripts and exemplify the potential of a careful study of the material aspects of papyri.

A last important aspect of the study is the evaluation of ways to identify reused papyri and the development of methods to study and document the evidence.

A first case study on the recording of erased text can be found on Digital Epigraphy.